Malraux Encounter on Art and Education

The Malraux Encounter on Art and Education took place on May 6-8, 2014. It was coordinated by Patrick Talbot, honorary director of Art Postgraduate Schools of Bourges and Nancy, and of the National Higher School of Photography of France; and by Humberto Chávez Mayol, researcher at Cenidiap (National Center for Research, Documentation and Information on Visual Arts). What follows is an overview of the sessions held during the first day at Cenidiap, on the 9th floor of the Research Tower of the National Center of the Arts.

The opening act was presided over by Elisabeth Belton Delègue, France’s ambassador to Mexico; Jorge Gutiérrez, Subdirector General of Artistic Education and Research of the National Institute of Fine Arts (INBA); Patricia Fernández, representing the National Council for Culture and the Arts (Conaculta); Mario Méndez, representing the Autonomous University of Nuevo León; Carol Alexandre, representing the French Ministry of Culture and Communication; and Carlos Guevara Meza, Director of Cenidiap. They all coincided in stressing the importance of this collaboration in the field of artistic education and cultural exchange. They also encouraged those present to reflect about concrete actions, and to consider the effects of academization models and the evaluation and legitimation modes in the French and Mexican systems.

Both coordinators highlighted the importance of defending artistic production and circulation spaces.

From the French experience, Talbot expressed concerns about the effect of the Bologna Process, imposed by European politics, which forces a deep reorientation of education in general. He stated the importance of building particularized curricular trajectories, while considering the possibilities of flexibility and adaptation. He also highlighted the need to prevent professionalization objectives from blocking a wider view of the training process, a genuine bildung favoring an integral construction of thought. In this sense, he set out several questions about academic forms and their relation to artistic education and contemporary art practices: Should art access those levels? Should thesis continue to be written as in the humanistic disciplines? Is it possible to provide, from the arts, new formats such as audiovisual, now that artistic objects and products multiply and diversify, when the aesthetic regime of images replaces the representative regime of art? He stated that inherited ways of thinking about art should be considered an essential contribution to the enrichment of culture, and concluded by saying that other fields are reluctant because of an incomprehension of contemporary art.

Chávez Mayol described a panorama characterized by the reduction of the distance between theory and experimental artistic practice. He pointed out that the construction of aesthetic objects, as sense operators, is going through major transformations, due in part to the adoption of new technologies which favor multimedia systems, with wider-ranging projects. He added that the complexity of both artistic practice and teaching, intensifies the need to find useful methods that allow us to distinguish between several formulations. He stressed the need to join efforts to establish links, exchanges and homologation between international institutions. He added that aesthetics as a field of signification demands other forms of knowledge, which imply introducing critical analysis of cultural power, facilitating the encounter of knowledges, and developing signification systems, semiotic and epistemic. For this reason, he vindicated the constitution and strengthening of trans-disciplinary methodological reflection seminars, which in trans-institutional environments can generate a dialogue between different methodological approaches.

In the first session of this seminar, entitled “Artistic teaching: pedagogic modalities in art schools”, Jean Paul Ponthot, Director of the Higher School of Fine Arts at Aix-en-Provence, who takes part in the project Factory of Images, stated the paradox that surrounds training: while in traditional university institutions knowledges are accumulative, in art schools there is a different relation to these knowledges, and they usually do not aim at fulfilling a well-defined program, so that the adoption of one or another model can favor a certain mediocrity. He stated the importance of taking into account that schools intend a learning that is non-specializing in principle; therefore, collegiate work is essential so that the students can be given support at any time, from the different specializations involved. It is a matter, he said, of providing support for the students, so that they be able to design their own curricula.

Gerardo Suter, from the Autnomous University of the State of Morelos, pointed out the need to discuss the concessions made by arts schools to the scientific academic sphere. He proposed to keep on the debate horizon the distinction between visual arts and stage arts education. He considered it essential to bear in mind the profile of newly enrolled students. Drawing from his experience in Morelos, he stressed the importance of strengthening their knowledge during the first two years, since students generally arrive with a deficient general culture level. On this subject, he stated the importance of preserving in this initial cycle a basic academic core, to provide them with a wide range of tools, so that afterwards they can move on to more specialized options. Regarding higher education programs, based on the Masters Degree in Artistic Production offered by his institution, he proposed reversing the theory-practice pairing, with an aim to establish a new relation of power in artistic knowledges. He highlighted the importance of recognizing the artistic process not just in terms of production, but also as a form of distribution. He defended the significance of locating our own methods within a system of our own, where there can develop teaching process which are closer to the processes of creation. In closing, he said that in real life theory does not go before practice: it is all experimentation.

In the second session, “Features of art research in higher art schools: the log”, Phillipe Hardy, Director of the Higher School of Art in Bretagne, made some concrete proposals, based on its experience as a European school created several previous schools. This unification made it necessary to revise all of the reports made by students since the beginning of their studies, and to propose a common jargon. He stated the necessity of combining the work of professors of Art, History and Philosophy. He pointed out the importance of maieutics, allowing students to develop their own personality, generating a field of self-knowledge which enables them to deal with many other fields of knowledge. On this subject, he mentioned e-learning possibilities, and the freedom to study outside of stipulated courses. Like other participants from French schools, he defended the possibility of forms of expression in arts research that go beyond the written word. Diaries, blogs and logs, as well as the absolute need to maintain parallel contacts with other schools and research centers.

Lastly, Ana Lilia Maciel, Coordinator of the Last Stage Academy in the Bachelor’s Degree in Visual Arts of the National School of Sculpture, Painting and Engraving, provided an analysis of the experience with artistic research logs in that institution. She highlighted the importance of considering an open cartography in artistic education processes, to be able to consider in full the difficulties inherent to working on the experimentation with expressive means. She said a log should be a tool for the construction of a synthetic aesthetic field, to facilitate the identification of subjectification processes, taking into account Guattari’s warning against homogenizing machinic fluxes. Maciel stressed the importance of fostering, through the log, an understanding of both the work processes and the resources. She said it is a question of sketching, as opposed to imposing results on a process which remains always open to different expression variables and versions. It might be said that it allows one to model without knowing the model, thus allowing for the appearance of interstitial spaces, where sensation displacement and experiences can take place, facilitating the emergence of different forms and metaphors, providing an open space for agency and the event, multiple and intensive. 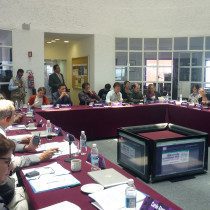 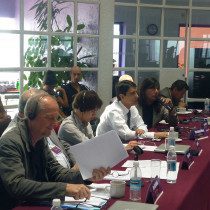 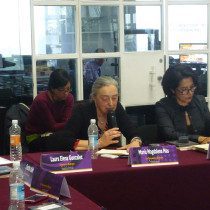 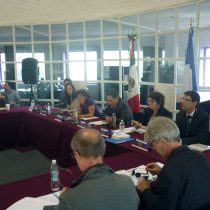 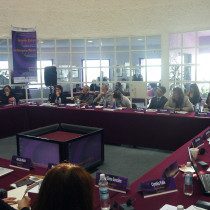 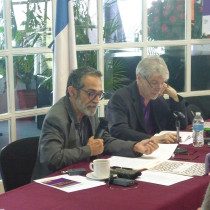 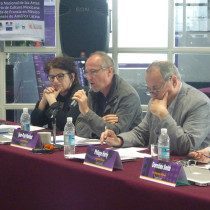 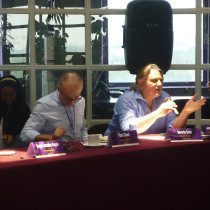