Several Japanese artists have arrived in Mexico at different times; some settled definitely, others temporarily. They all have brought with them a valuable artistic legacy. Tamiji Kitagawa, for instance, lived here in the 1920´s and 30´s, and taught at the Open Air Painting Schools. The American-Japanese artist Isamu Noguchi stayed for almost a year in Mexico, and left a relief at the Abelardo L. Rodríguez Market in Mexico City’s Historical Center. We must, of course, mention Fujita Tsughru.

Later on, another group of sculptors arrived. Their aesthetic ideas were freer and much more modern. Among them: Kiyoshi Takahashi (1925-1996), Sukemitzu Kaminaga (1939-2000), Kiyoto Ota (1948) and Hiroyuki Okumura (1969), who have made the transition from figurative to non-object art. The latter form of art posits a two-way proposition: the artist’s creativity, to find what is essential and transcendent in his or her work, and the spectator’s sensitivity, for an adequate interpretation of the work.

Takahashi arrived in Xalapa, Veracruz, to carry out sculpture work for Universidad Veracruzana, where he was appointed professor and head of the Sculpture Department. He was interested in delving into Pre Hispanic culture, and the influence that life in Mexico, its Nature and people, might have on his work. He endowed his pupils with a “school” of discipline and humility, i.e. the rigor of the artist towards himself and his conscience, as well as respect towards the material with which one works.

The main reason for Sukemitzu Kaminaga’s stay in Mexico was his interest in studying the Pre Hispanic tradition of wood carving, and becoming familiarized with the spirit that guided their selection of materials. After his arrival, he came in contact with the Swedish-Mexican sculptor Waldemar Sjölander, and together they recuperated the direct wood carving technique, to produce their works. Afterwards he was a teacher, like Sjölander, at Escuela Nacional de Pintura, Escultura y Grabado (ENPEG). The power of synthesis and the vigorous displacement of volumes, added to an apparently simple interplay of semi-geometric elements, distinguished him as “the poetic maker of forms”.

Kiyoto Ota’s decision to move to Mexico in search of new possibilities and a greater freedom to work, was driven by the fact that the prevailing atmosphere in Japan is too tightly closed; materials, workshops, machines, are hard to come by. Here he has found true friends and great support. Like Kaminaga, he found in Sjölander unconditional support and guidance. His work is permeated by both Japanese and Mexican influences, with a style very close to simple, minimalist art. A teacher at ENPEG and Escuela Nacional de Artes Plásticas, he has trained countless pupils in the area of sculpture. His art attracts the cautious glances of the spectators, it incites us to go over his works several times, thus gradually enriching our inner lives, our spirituality, establishing a link.

Hiroyuki Okumura collaborated with Kiyoshi Takahashi on a monumental work in Japan, and this circumstance represented a great opportunity, because he was interested in coming to Mexico. His work is highly spiritual, and when it “touches” us, there is an inner explosion. They are simple pieces, apparently without much complexity, containing several symbols and textures. They are very pure and strong, combining sculpture material with rugged and polished surfaces. These opposite elements provide the pieces with magnitude.

The sculptural production of these artists denotes and connotes the Zen philosophical notion known as wabi-sabi: if an object or an expression can provoke in us a sensation of serene melancholy and spiritual longing, then we are referring to that concept. 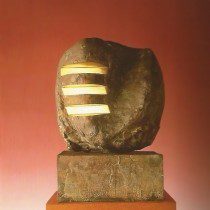 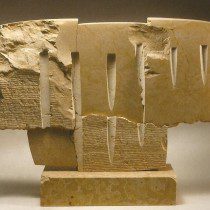 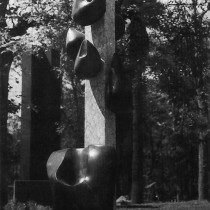 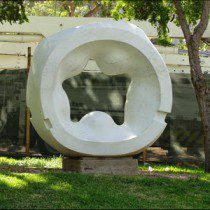