Certain that the State did it, commemorations rise up a notch, developing autonomies and self-governance. On Saturday the 25th, the Santo Domingo, Los Pedregales, neighborhood welcomed the Ayotzinapa parents, and as it has done every month for the past nine years, a survivor from the Acteal massacre, who is enduring an unending rehab process because of the seven bullets she received. There was delicious pozole and tamales, followed by a testimonial reflection and the report made by the neighborhood organizations. In solidarity, one of the houses now shows on its metal gate the faces of the 43. Twenty-five collective murals testify to this solidarity; some of them include portraits of the victims, their names, and their mothers bearing these testimonials. One of the murals reproduces an engraving by Arturo García Bustos, dating from over fifty years ago, with an armed Zapata pointing directly at the spectator and a sign that reads: “And what have you done to defend the conquests for which we gave our lives?” The mural adds Vicente Guerrero, actualizing the interpellation. In another mural, “Mujeres en Lucha de los Pedregales” affirm that “The Normales (Teacher-training schools) have a reason to exist”. “Insurrección Visual” includes portraits of the victims, and a university painter sets down the sites of several massacres, from Tlatelolco, Acteal, El Charco, to Aguas Blancas, including Palestine, so as not to forget capitalist crimes all over the world. “Comunidad de Los Pedregales por Ayotzinapa” works all the time and Lucía Vidales paints non-stop, filling the outside walls of the Church of the Ressurrection. A high-impact realism achieves the drawing intervention of the portraits, with the presence of the interpellating relatives of the victims, with an exact rendition of bodies and faces. Niether forgive, nor forget, affirm the collectives of families in solidarity with the 43, and with the neighborhood that does not balk at shutting off traffic on the street –a street with an irregular trace, typical of Okupa urban planning- to celebrate the decision to remain united, safe, alert, in order to face up to the corrupt government with their community organization.


On Sunday the 26th, on a stage in front of the National Lottery building, in one of the most intensely circulated intersections in Mexico City, the first in a succession of speakers was Brother Miguel Concha, from the “Francisco de Vitoria Human Rights Center”, the leader of Centro Universitario Cultural, situated next to Ciudad Universitaria, which hosts conferences and forums on all those issues that the University authorities forbid. Pedro Guerra premiered an excellent song; he was scheduled to be the last to speak, but the avalanche of speakers changed all that. A dancer performed en pointe, and a very good Huasteco group, with trumpets, alternated with the poets and the other participants, Doctor Hugo Aboite –the Dean of Mexico City University- among them. The black-clad women of the Madres Matria Collective recalled the opening of the National Lottery building, the tallest in Mexico City way back then, by President Álvaro Obregón, who was given a lottery ticket as a gift, which not surprisingly turned out to be the winning ticket. Such is ever the fraudulent and obsequious way with corrupt rulers, then and now.


The news of the installation of a monument on the medial strip on the intersection of Reforma and Juárez avenues, gathered onlookers and volunteers. This intersection is a special place for popular marches, because the buildings of powerful newspapers are located there. There we shouted in 1968: “Sold-Out Press!”, and there some of the 132 rode naked on their bicycles, with the slogan: “Let’s see if this way they finally see us!”, which was used by an activist as she undressed. Rumor had it that the truck that brought the 43+ sculpture came from out of the city; it carried the red steel sculpture, about 9 feet tall, its supports, a power plant, power drills, picks and shovels, necessary tools for excavating, to place containers full of concrete to fix down the pieces and make them harder to remove, and souvenir postcards to obtain financial contributions. On the opposite sidewalk, a perfectly measured metallic sign reads: “They were alive when they took them away; so we want them back alive!” In the evening, a barely cohesive march saluted the monument, to which the prefix “anti” had been added, even though it constructs an autonomous public space, something quite exceptional in itself, completely foreign to the geometrical, non-figurative monstrosities dotting the city landscape today, which do not signify anything other than the arbitrariness of the powerful few. The vast round fountain at the head of Juárez Avenue, used as support for slogans on behalf of the 43, faces the anti-monument as a testimonial to the monstrous crime of State. The anti-monument denounces, by its very presence, the privatizing and overbearing corruption of public space, and it proves popular power, through the initiative of a strictly planning collective of the excellent intervention in one of the world’s most heavily circulated intersections. Let us hope it will endure as aesthetic dimension, charged with autonomy and self-governance, freed from the corrupt State. It could well be reproduced in key places in the history of State terrorism and organized popular resistance and repudiation. 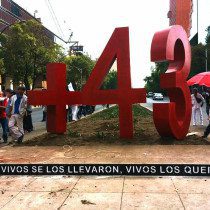 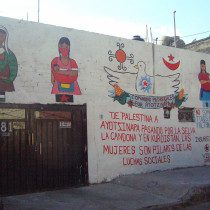 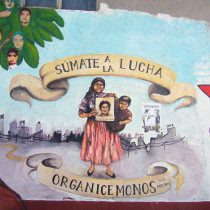 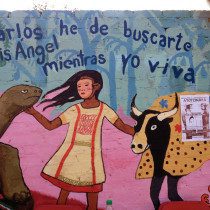 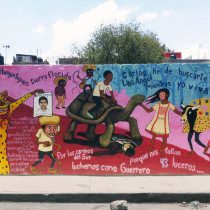