A year after the forced disappearance of the 43 students of Normal Rural Raúl Isidro Burgos of Ayotzinapa, and the brutal murder of three others, the slogans of the day are:
They took them away alive, we want them back alive! The State did it!


The Memorial to Victims of Violence in Mexico was inaugurated in 2012, six years after the start of Felipe Calderón’s “war on drugs”. Seventy huge horizontal and vertical metal plaques, placed on an open air space, with paths, water ponds and cement benches, to create a space for transit and reflection. On the plaques there are phrases engraved on the subject of death, forgetting, memory, the absent ones, and grief, by several writers, ranging from Carlos Castillo Peraza to Juan Gelman. The text placed at the start of the pathway states that it is dedicated to the “victims of criminality” in Mexico, which is paradoxical since the lists of victims’ names pasted on the plaques include those murdered by the State and its repressive forces: Tlatelolco, Acteal, the disappeared and the murdered during the dirty war, Ayotzinapa, etc.


A sculpted space that alludes to and presents a terrible reality. In its form, there is a political statement inscribed in a particular discursive and symbolic dimension: that of the State and those organizations legitimized by human rights. The Memorial is part of a narrative that places violence exclusively on the side of organized crime. To counter this, by way of another plaque placed at the start of the pathway, the Comité 68 states that it took up the challenge of naming the victims. It was the Comité who put up the names of those murdered and disappeared by the State, and also singling out and naming the State for its responsibility in this historic and everyday violence, thus attempting to avoid the generalization implied in the original intent of the monument, presented as a Memorial devoted to “victims of violence in Mexico”.


The symbolic form is in tune with the myth that naturalizes and reduces social conflict: there is a correspondence between the visible and the statement. According to this narrative, the victims are one and the same thing: from the communists murdered in the 1920’s to the guerrillas fallen during the attack on the Madera garrison in 1965, the young “normalistas” from Ayotzinapa, the murdered journalists, or the scores of femicide victims. Isolated names, grouped in terms of events or categories of violence, simply added up in lists to come up with a chilling number which will always fall short of reality.


It is impossible to obviate the place of enunciation of this “Memorial to violence”, as it has been called by the poet and activist Javier Sicilia. It adds to the list of paradoxes and incongruities: it was erected by the culprits, who claim for themselves the power to represent grief and memory from their privileged and legitimized space, even if it is increasingly put into question and exhibited by other actions, practices and reflections. It was commissioned to a private architectural firm which drew its inspiration from other memorials and from biblical references, more concerned with the effects produced by the chosen materials and the LED illumination. The proposed meaning does not correspond to others that inhabit society; signification is disputed and discourse is a space of struggling positions producing knowledge and meaning. The discursive formation from which it derives and in which it is inscribed is not homogeneous: on the one hand, there is the strategy and the common pattern of the State and its powers; on the other, the ruptures, the breaks, of those of us who find other meanings, different meanings, in the same historical event. Different and conflicting subject positions, facing one particular knowledge. The representation at play in this Memorial does not bear a univocal meaning. The chosen sculptural form, cold and austere, does not suffice to eliminate its connotation, the indispensable historical reason to understand what is involved here.


It constitutes a politico-aesthetic imposition without symbolic efficacy, precisely because of the place of enunciation from whence this space derives. It does not manage to become a place of memory. There is no interpellation, no appropriation or co-authorship in the proposed act of reception. But there are replies nonetheless, taking place in other symbolic, political and social spaces. There are fragments of bricks at the feet of the plaques, for people to write whatever they wish on them. There are no more than two or three messages there. The fact that this space is located next to the military installations at Campo Marte is not without relevance. Everything counts and signifies. However, we would do well in appropriating this space in order to re-signify it and to establish a place for historical memory. For instance, by organizing on a regular basis politico-cultural events; graffiti, stencil or mural painting activities on the desolate steel plaques; free lectures; whatever we can come up with to build our public space.


Here there is no genuine looking back at the past that must never be repeated, which we must point out and bear in mind precisely so as not to forget. Everything that this Memorial alludes to is present history, current events, growing numbers and statistics, families destroyed, truncated lives. How can there be restitution? How can this be signified? How many steel plaques will it take? How many names and loving messages carved on them, to wrestle them from anonymity, from their reduction to a simple number? “Stories without history” of those who exist only through their violent death. 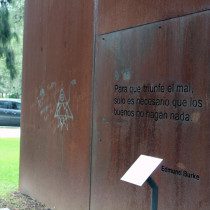 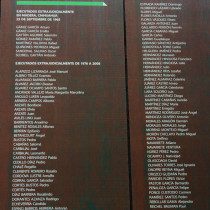 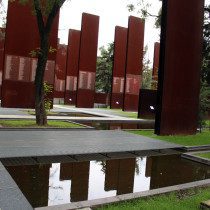 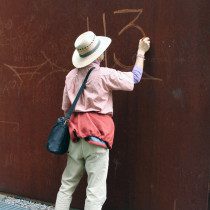 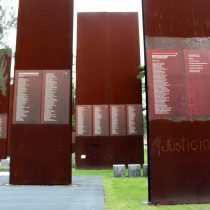 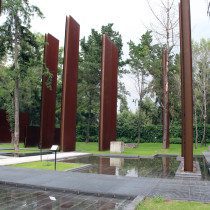 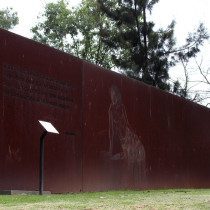 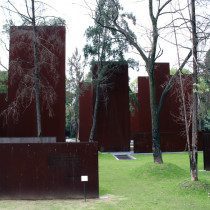 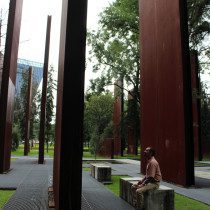