The Academic Council of the Centro Nacional de Investigación, Documentación e Información de Artes Plásticas (Cenidiap), of the Instituto Nacional de Bellas Artes (INBA), hereby expresses its concern regarding the works being carried out at the building once occupied by the former Secretaría de Comunicaciones, Transportes y Obras Públicas, (SCOP), in Eje Central and Xola, in Mexico City. We request that INBA make a public pronouncement in defense of the preservation and restoration of the murals and sculptures located in the building, through its corresponding department, in conformity with the laws regarding the protection of Mexico’s artistic heritage.
END_OF_DOCUMENT_TOKEN_TO_BE_REPLACED

La Esmeralda in the Student Movement of 68


Those of us who enrolled in 1965 in Escuela Nacional de Pintura y Escultura (ENPE) “La Esmeralda” were a young, restless group. Many came from provincial cities in Mexico, some came from abroad. We all had great expectations for our education at this national school. END_OF_DOCUMENT_TOKEN_TO_BE_REPLACED


If Felipe Ehrenberg (1943-2017) were still here, we would have discussed the gatherong resistance against the State’s so-called “historical truth” about Ayotzinapa, through slogans, texts, and graphic art, constantly moving not only in Mexico and the United States, but in Europe and other far-off places. The rural and popular roots of the Ayotzinapa relatives meet libertarian intelectual lucidity, bringing about a high-impact knowledge all over the world, against the systemic corruption of late capitalism. END_OF_DOCUMENT_TOKEN_TO_BE_REPLACED

AND WHAT HAVE YOU DONE


Arturo García Bustos died of a heart attack while an exhibition of his and Rina Lazo’s work -organized by Dina Comisarenco- was still open to the public at the library of Universidad Iberoamericana. The beloved maestro passed away at the Red House in Coyoacán; some people call it the House of Malinche, but I prefer the former name, with its association with the color that identifies all communists. END_OF_DOCUMENT_TOKEN_TO_BE_REPLACED


The Taller de Investigación Plástica (TIP) was a multidisciplinary artistic collective born in the upheavals of the 1970’s, a time of major social movements. It was the first group to produce community art in Mexico, a kind of public art that emerged when “individualism and art for art’s sake began to be replaced by collaboration, social relevance, process and context” [1]
It was an avant-garde proposal, misunderstood at the time, arguing that the meaning of art should be found at its physical or social site, not in a museum, and it should involve its target audience, in order to turn it into a tool for social change. END_OF_DOCUMENT_TOKEN_TO_BE_REPLACED


The introduction to the anthology Raquel Tibol, la crítica y la militancia, published by Centro de Estudios del Movimiento Obrero y Socialista, recounts the life and miracles of the redoubtable critic, from her beginnings as a writer and journalist in her native Argentina. During a Continental Conference on Culture, promoted by Pablo Neruda in Santiago, Chile, in 1952, she met Diego Rivera and decided to accept the task of organizing the Mexican section. Her quick, efficient and clear writing style opened the path for her to join projects aimed at achieving national liberation and socialism.
END_OF_DOCUMENT_TOKEN_TO_BE_REPLACED 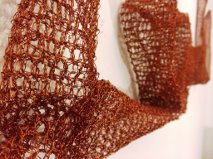 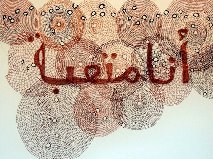 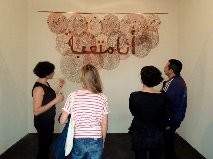 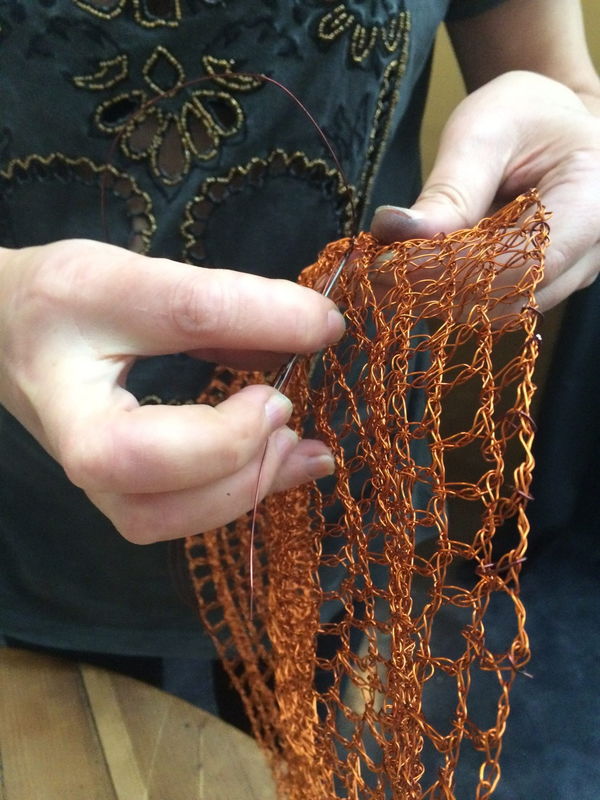 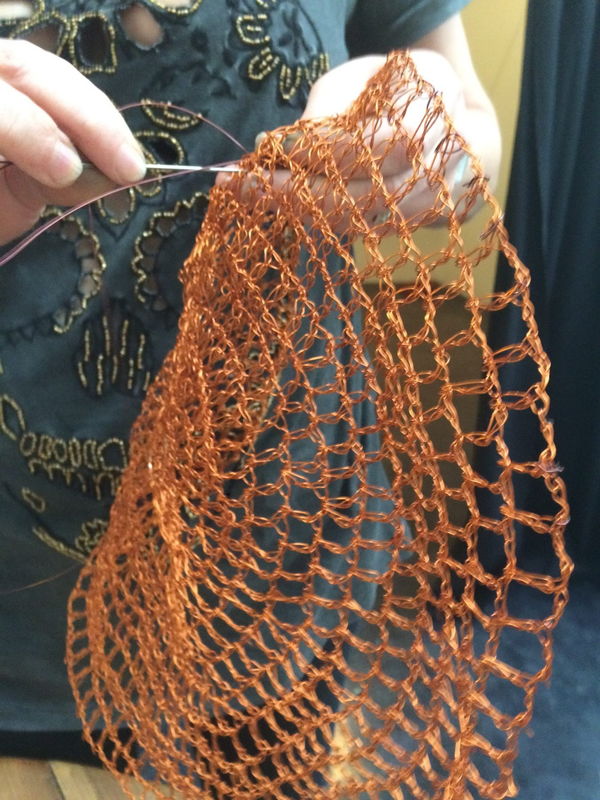 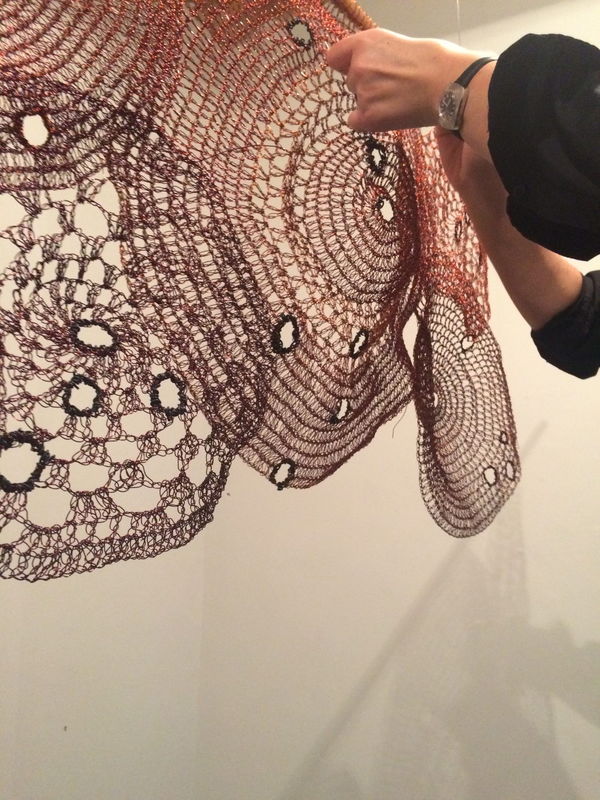 
In June, 2015, at Café 123, Suad, an artist born in Casablanca, Morocco, residing in Mexico City since 2010, exhibited through the One Month | One Artist initiative her piece entitled Entrelazados, (Entwined), a work that distills her artistic practice, accumulated through successive purifying and deepening processes in her studious journey through Lyon, London and New York. It is also the announcement of her new domain: both as knowledge/craft and as a territory for semiotic research. END_OF_DOCUMENT_TOKEN_TO_BE_REPLACED 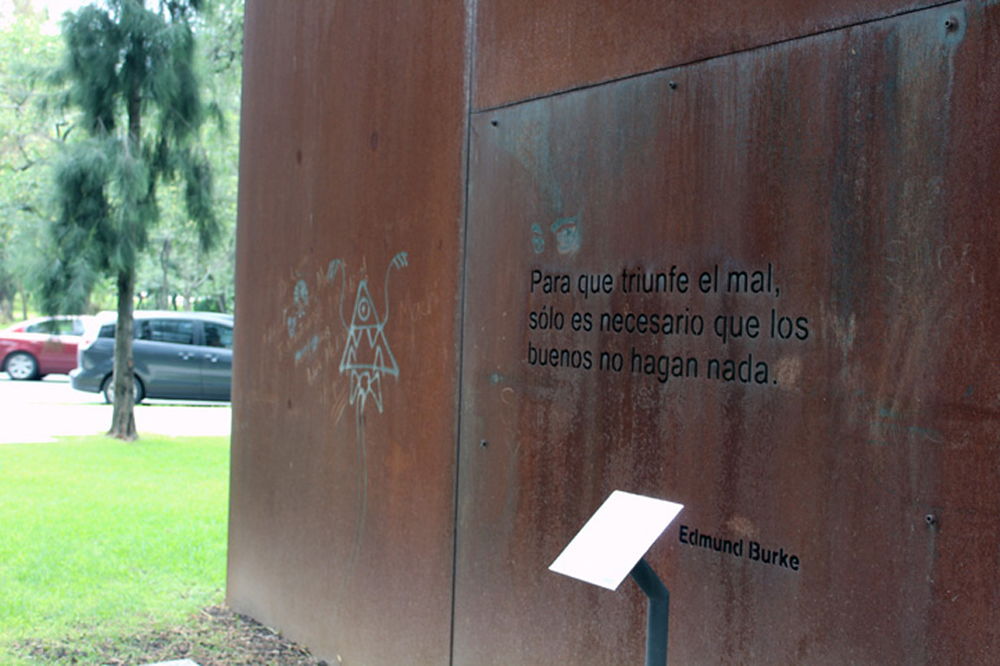 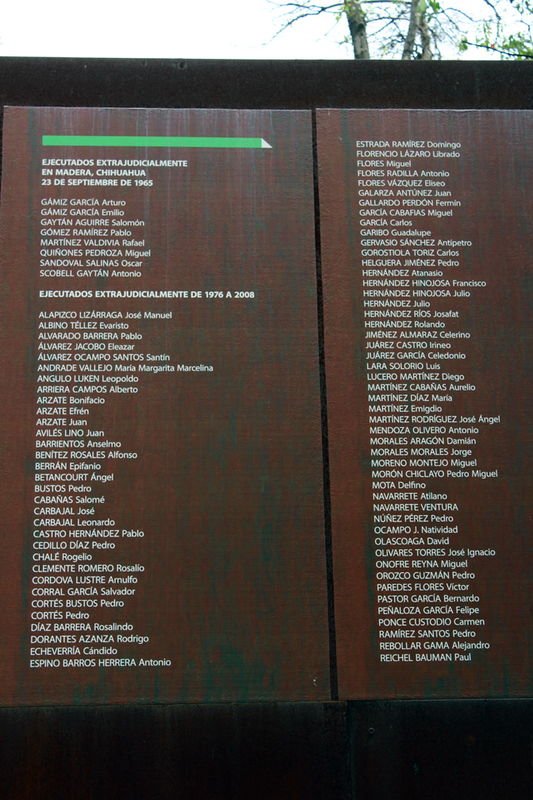 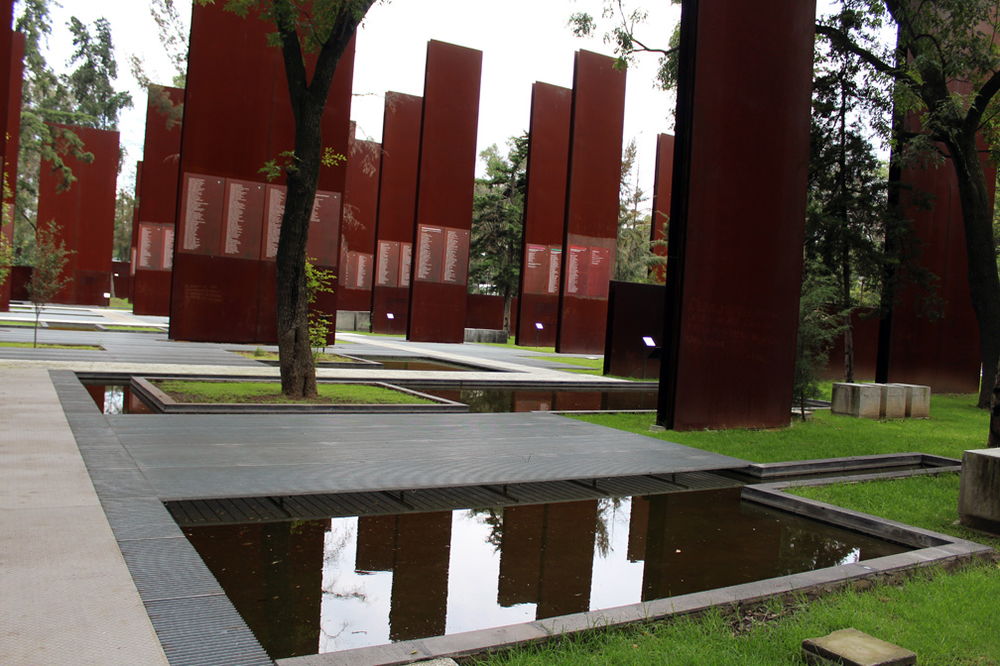 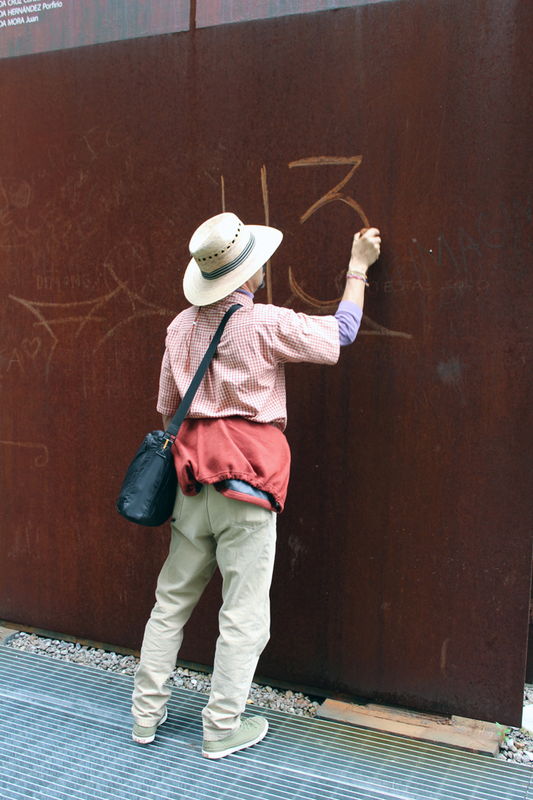 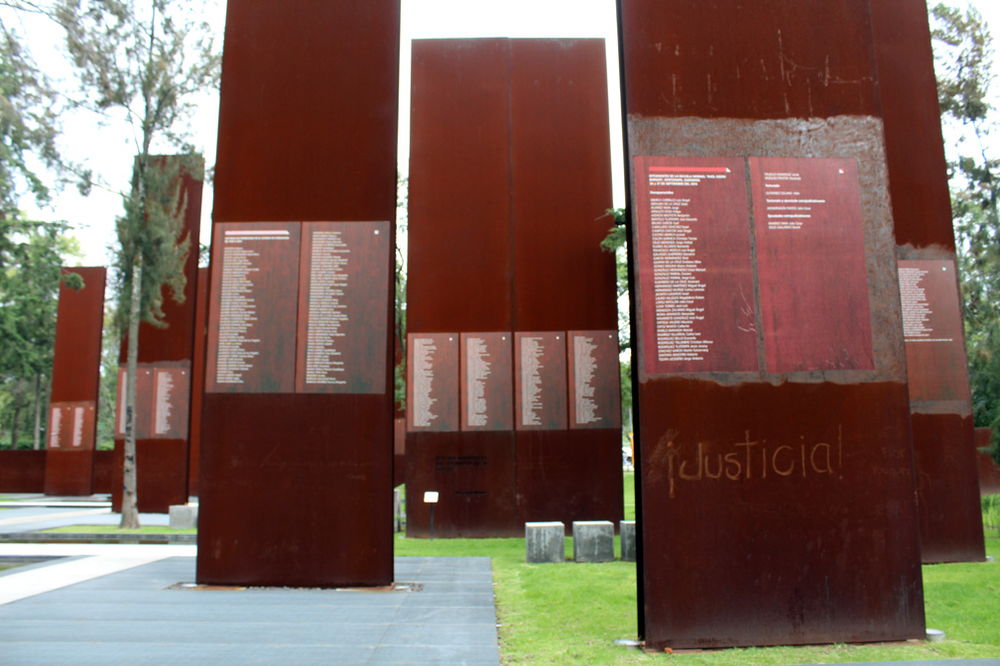 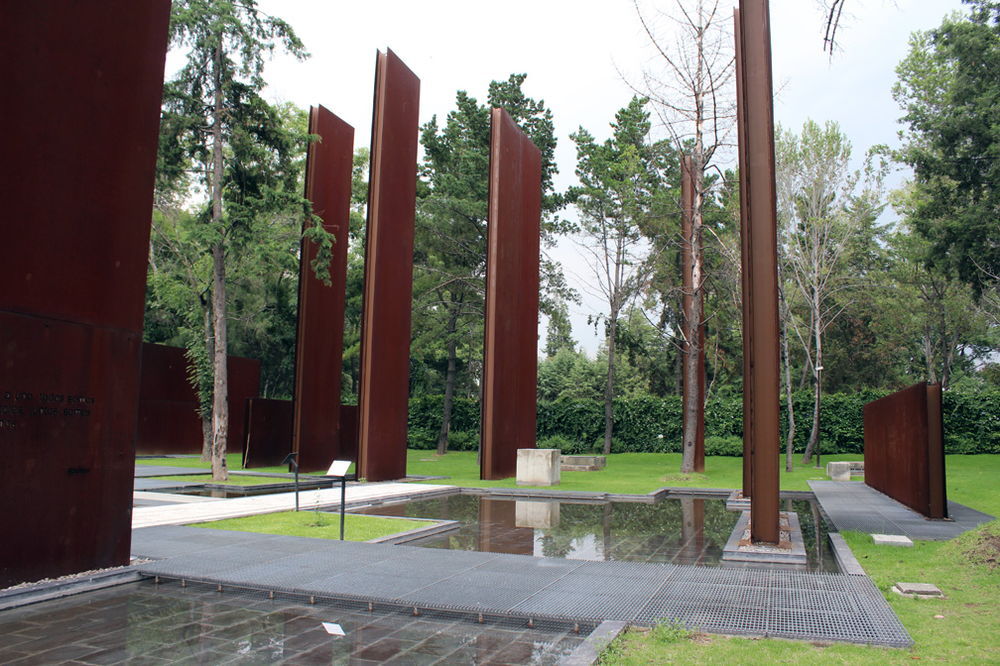 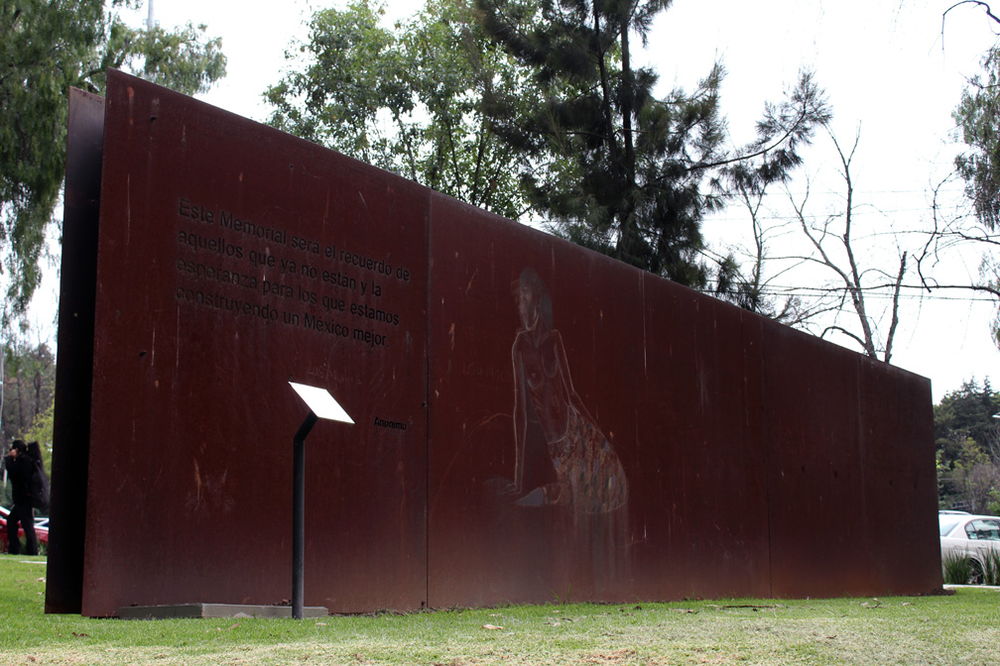 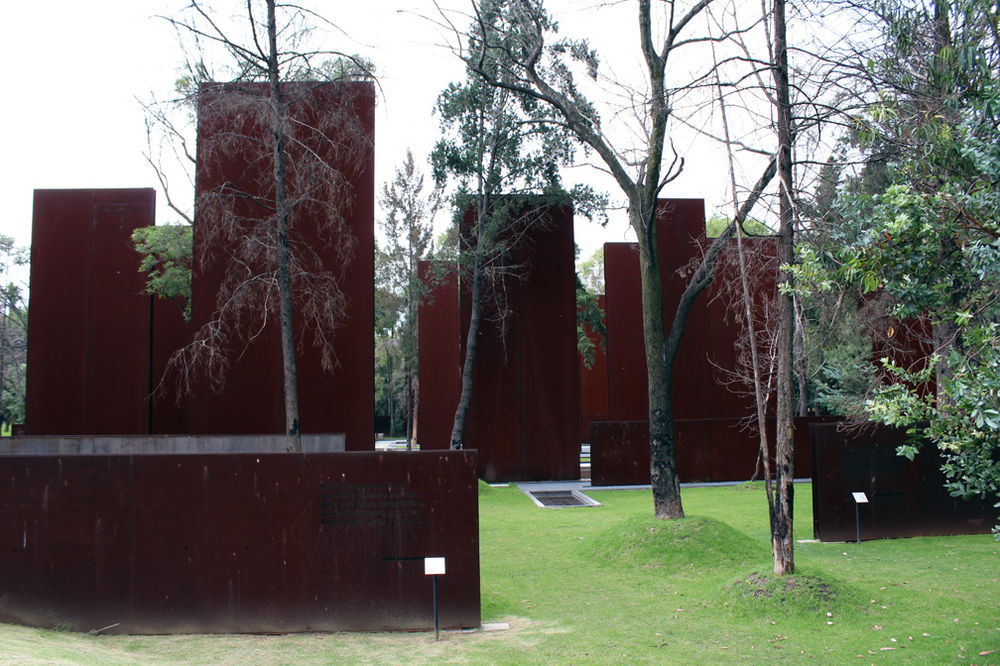 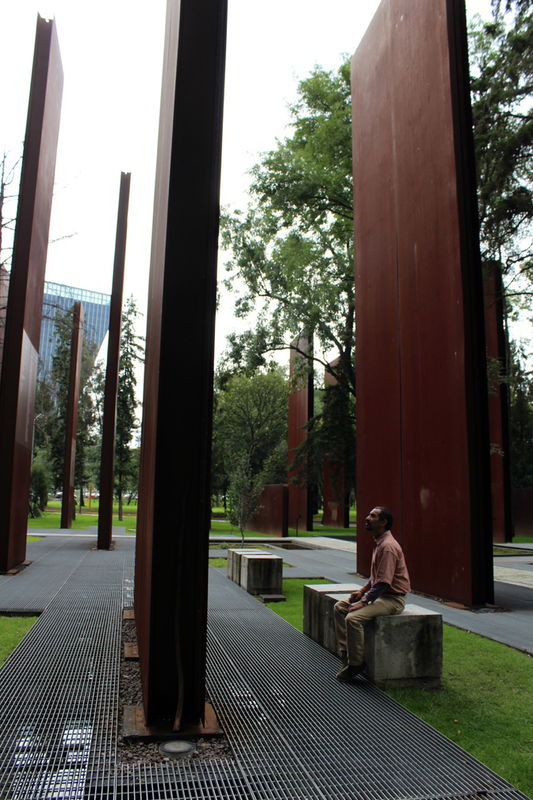 
A year after the forced disappearance of the 43 students of Normal Rural Raúl Isidro Burgos of Ayotzinapa, and the brutal murder of three others, the slogans of the day are:
They took them away alive, we want them back alive! The State did it! END_OF_DOCUMENT_TOKEN_TO_BE_REPLACED

In the late 1970’s, Mario Benedetti wrote the poetry collection Letras de emergencia, which included a prologue under the title “Canto libre y arte de emergencia”, [“Free Song and Emergency Art”].(1) In it, he stresses the urgent need to raise one’s voice against unreason, expressly alluding to the song by Daniel Viglietti, who was at that time a political prisoner in Uruguay. I see no objection to extending the poet’s considerations to all artistic expressions raising from the terrible conjunctures of our histories. Benedetti states that someone will not fail to wonder how we can have the time and the willingness to sing, paint or dance; he points out that these expressions produce an aesthetic effect, interpellate in another way, bring us affectively closer, build a community: END_OF_DOCUMENT_TOKEN_TO_BE_REPLACED 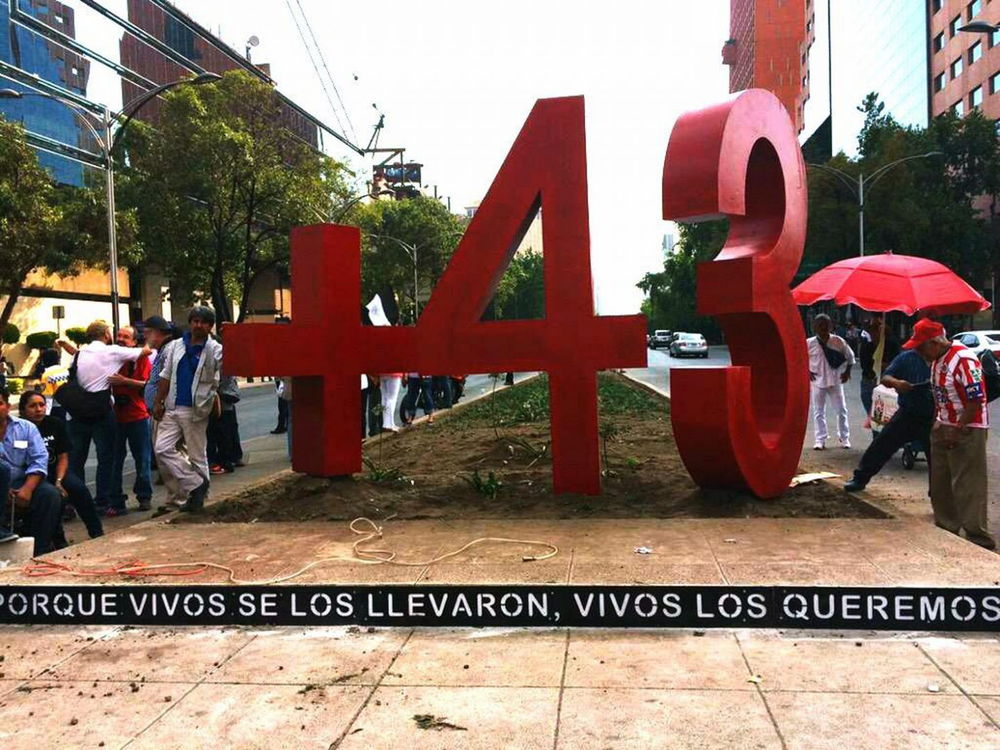 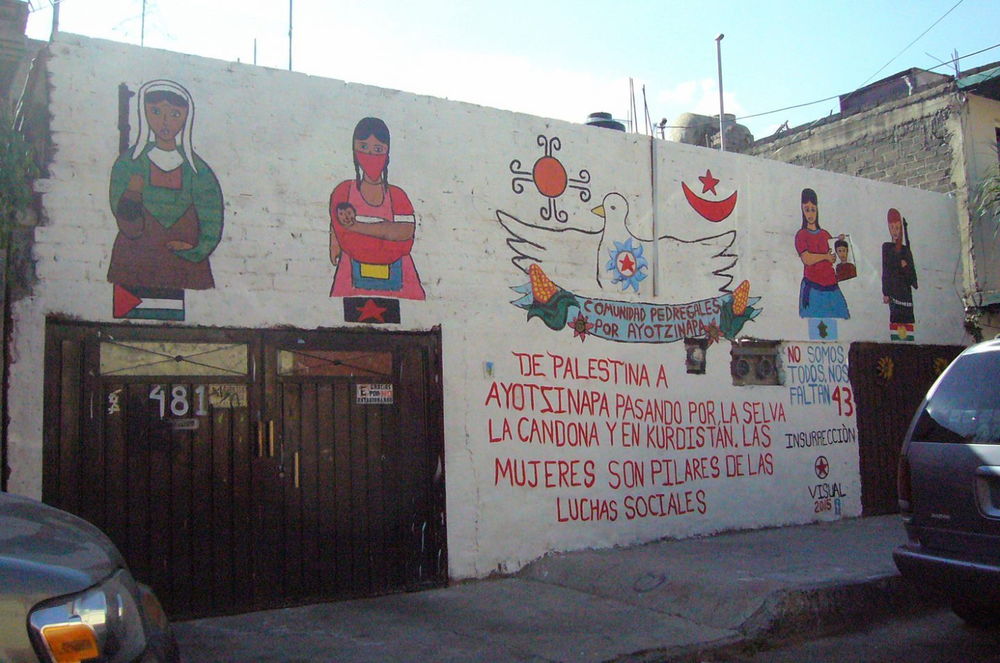 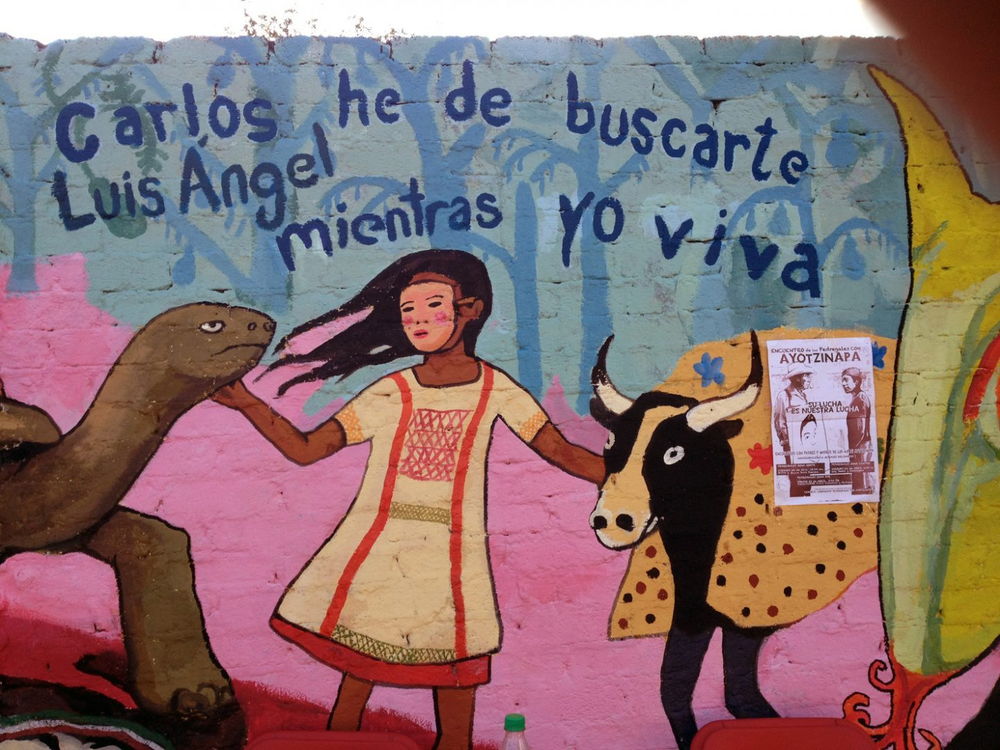 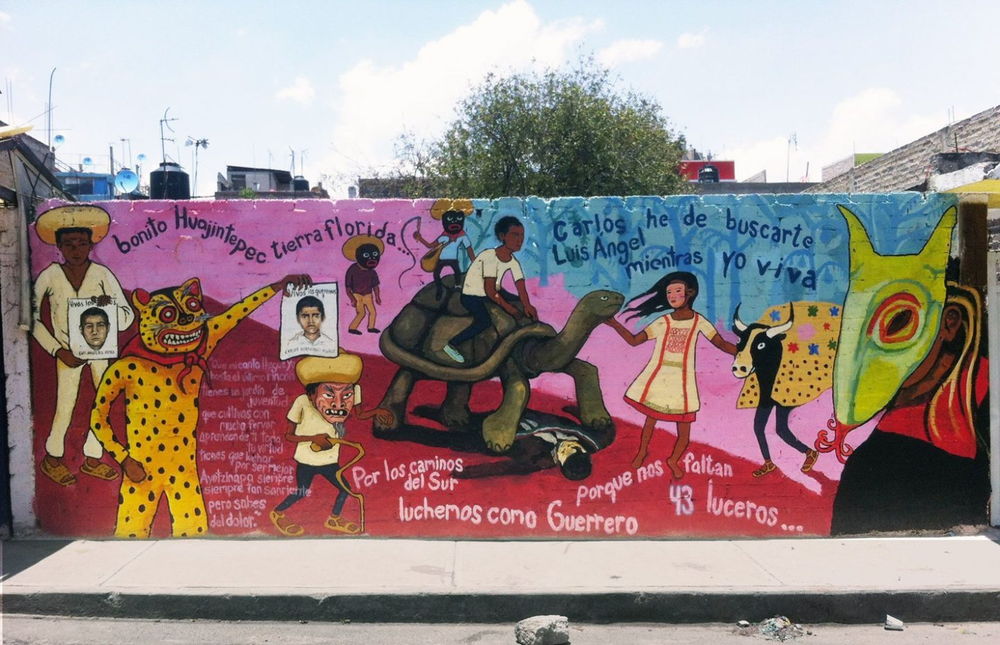 
Certain that the State did it, commemorations rise up a notch, developing autonomies and self-governance. On Saturday the 25th, the Santo Domingo, Los Pedregales, neighborhood welcomed the Ayotzinapa parents, and as it has done every month for the past nine years, a survivor from the Acteal massacre, who is enduring an unending rehab process because of the seven bullets she received. There was delicious pozole and tamales, followed by a testimonial reflection and the report made by the neighborhood organizations. In solidarity, one of the houses now shows on its metal gate the faces of the 43. Twenty-five collective murals testify to this solidarity; some of them include portraits of the victims, their names, and their mothers bearing these testimonials. One of the murals reproduces an engraving by Arturo García Bustos, dating from over fifty years ago, with an armed Zapata pointing directly at the spectator and a sign that reads: “And what have you done to defend the conquests for which we gave our lives?” END_OF_DOCUMENT_TOKEN_TO_BE_REPLACED